Pearls are one of the oldest and most coveted precious gemstones in the world – and wild, natural pearls today regularly rank among the most highly valued gems you can buy. The history of pearls being used as jewelry stretches back over 6,000 years – and with that kind of staying power, it’s no wonder that everyone from royalty to celebrities and collectors has yearned to own them, regardless of price.

Natural pearls of high quality suitable for fine jewelry are incredibly rare – for every 10,000 to 15,000 wild oysters fished from the sea, only 1 or 2 will yield a pearl. Due to their extreme rarity, and their illustrious history and provenance, natural pearl jewelry will always be more highly valued than our modern cultured pearl cousins.

Keep reading to reveal the Top 10 Most Expensive Pearl Necklaces in the World. No list would be complete without mentioning La Peregrina, also known as “The Pilgrim” or the “The Wanderer”. This large, gorgeous natural pearl got its name due to its 500 year journey through history and royal collections. Originally found in the Gulf of Panama by an African slave, La Peregrina was brought back to Spain, and presented to King Philip II who gifted it to his bride to be, Mary I of England. Upon her death, La Peregrina returned to the Crown Jewels of Spain, and remained there for 250 years.

By 1808, Joseph Bonaparte – Napoleon’s older brother – became King of Spain. He was forced to abdicate his throne in 1811, and La Peregrina was among the treasures that he took with him in his flight. The pearl was willed to Napoleon III after his death, and La Peregrina eventually was sold to the Duke of Abercorn in England. It stayed within the family’s collection for nearly a century before finally being purchased at auction by actor Richard Burton in 1969 for $37,000.00.

Burton famously gifted La Peregrina to his wife, Elizabeth Taylor – a known jewelry and pearl connoisseur. Taylor treasured her Valentine’s Day gift, and wore it often in many configurations over the decades, until she had the jeweler Cartier create a show stopping necklace of pearls, rubies and diamonds to showcase the gem. Taylor could be seen wearing La Peregrina until her death, and the pearl was sent to Christie’s Auction House in 2011. The Baroda Pearls were originally an incredible Seven-Strand Pearl Necklace composed of stunningly matched natural pearls, ranging from 10.0-16.0mm in size. The fabulous necklace was owned by the Indian Maharajas of Baroda, and grew in fame throughout the centuries due to their rarity and magnificent beauty.

Over the years, the Seven-Strand Baroda Pearl Necklace was broken up and distributed to various collectors. However the largest and most perfect of these pearls was re-created and matched into a large Double-Strand Pearl Necklace of 68 round to slightly drop-shaped pearls measuring 9.47-16.04mm and finished with an incredible Cartier-designed cushion cut diamond clasp. It came to Christie’s Auction House in 2007, and was sold with matching Cartier natural pearl earrings surrounded with sparkling diamonds, pearl and diamond brooch and ring suite.

The Perfect Strand of Pearls

The perfect strand of pearls... Is it possible?


Perfectly round, beautifully matched, with a mirror like luster – Japanese Akoya pearls can’t be matched for quality and high-end appeal. This is the classic pearl necklace. 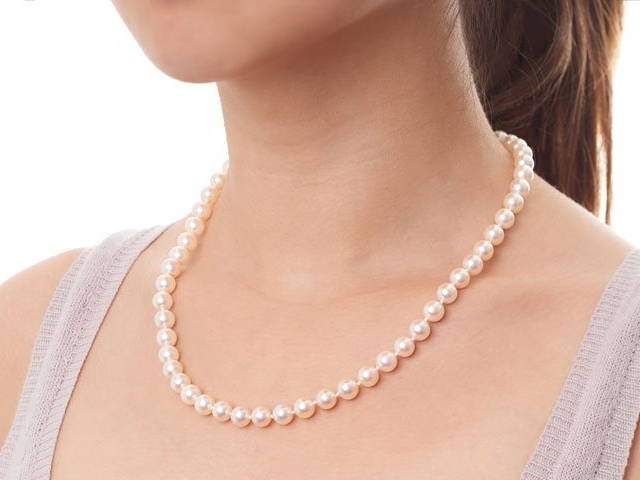 The “Big Pink” is an exotic natural Abalone Pearl, one of the largest and finest of its kind in the world. Weighing in at a whopping 470 carats, the Big Pink Pearl stuns with its natural pastel Pink hues, and shimmers with iridescent flashes of Blue, Green, Lavender, Silver and Orange overtones. The Big Pink’s exact origin isn’t known, but biologists and gem experts think that the pearl was grown by either a Red or Pink Abalone species (Latin names Haliotis Rufescens and Haliotis Corrugata respectively), native to California, Australia and New Zealand, and are known to produce some of the most colorful and beautiful wild pearls in the world.

Discovered by wild pearl hunter Wes Rankin in 1990, the Big Pink was mounted in a swirling diamond pendant mounting. The Abalone pearl pendant currently resides in Petaluma, California at the Pacific Coast Pearls company. The Big Pink held the Guiness Book of World Records title of “Largest Abalone Pearl” ever found, however a recent 2010 discovery of an even larger 710 carat Abalone pearl (also found off the California coast) has since taken the title. This impressive Single Strand natural pearl necklace is famous for being part of the Duchess of Windsor’s jewelry collection, however its legacy stretches back to the imperial Russian era. The Dowager Empress Maria Feodorovna of Russia sold the necklace to King George V in 1929, who gifted the natural pearl necklace to his wife, Queen Mary of England. From Queen Mary, the necklace went to the heir to the British Throne, Edward the Duke of Windsor who subsequently gave the fabulous pearl necklace to his fiancé Bessie Wallis-Simpson upon his marriage to her in 1937.

Designed and created by Cartier of Paris at the behest of Queen Mary, the spectacular single strand natural pearl necklace features 28 creamy-white natural pearls ranging from 9.2-16.8mm, possibly of Australian origin (making them natural South Sea pearls). It is a smaller choker length, measuring just 14-Inches including the clasp. The pearls are all symmetrically shaped but a variety of Round, Near-Round, Button and Drops. The diamond clasp features 2 Emerald-cut diamonds 2.00cttw approximately, along with 2 fancy cut Trapezoid diamonds to either side, also 2.00cttw approximately, framed by 20 round single-cut diamonds 0.70cttw approximately in an oval-shaped clasp forged by Cartier of Paris. An incredibly large drop-shaped natural pearl and diamond pendant and round diamond and pearl earrings, also designed by Cartier at the Duke of Windsor’s request for his beloved wife was also considered to be part of this suite.

Upon the Duchess of Windsor’s death in 1986, her entire collection of fine jewels acquired after a long, loving marriage was bequeathed to the French Research Institute, with instructions to liquidate the entire collection via auction with the proceeds going to medical research and charity. The last sale of the Duchess of Windsor’s famous necklace was in 2007, when it was purchased by Calvin Klein, as a gift for his wife. Rare and exotic, this glamorous natural pearl necklace is composed entirely of naturally-colored black pearls featuring a Dark Charcoal Grey body color with sumptuous Overtones of Peacock, Green, Aubergine and Silver/Steel. The provenance of this unique multi-strand natural black pearl necklace is difficult to track down (the Auction House, Christie’s New York, is staying mum!), but it most recently fetched a record-setting $5.1 Million in 2011.

The magnificent collection of pearls is composed of four lengthy strands of 63, 69, 76 and 81 wild pearls, graduating from 4.9-12.65mm. The Swiss Gemmological Institute examined the pearls, and issued an official gemology report certifying the wild origins of the pearls, and their natural un-enhanced colors. Originally owned by Lady Pearson, the Viscountess Cowdray, the Cowdray Pearl Necklace initially sold at auction at Christie’s London for $3 million, and later again went to auction at Sotheby’s Auction in Hong Kong where it fetched a cool $5.3 million. We can see why. This absolutely amazing natural pearl necklace is from an unknown royal family and fetched a record-breaking $9,081,000 at auction in 2013. The necklace measures 21 to 35-Inches and each strand features creamy-rose natural pearls, most likely from the Pinctada radiata saltwater oyster species native to the Persian Gulf. The P. radiata oyster is very close in size and produces pearls similar to that of the Akoya pearl oyster, Pinctada fucata martensii, which is native to the coastal waters of Japan, China, Vietnam and Burma.

An astounding 614 pearls graduate from 5.1-17.05mm throughout the continuous layout, and the necklace is finished with a platinum and white gold bar clasp studded with tiny cushion-shaped, Old Mine Cut diamond accents. The $9 Million price tag, while not the absolute highest price fetched for any pearl necklace ever (that distinction goes to La Peregrina, #1 on our List), it is perhaps the 2nd or 3rd most expensive pearl necklace in the world. This storied multi-strand natural pearl necklace is said to have originally been owned by the Russian empress Catherine the Great. The stunning layout was purchased by Cartier after the Russian Revolution in 1917, who was an avid collector of Russian imperial jewelry. Cartier then sold the necklace to Horace Dodge, founder of the Dodge Motor Company, for $825,000 USD – in today’s dollars, that amounts to a jaw-dropping $70 Million USD.

The Dodge Necklace was kept within the Dodge family for generations, and was at some point broken into three different pearl necklaces, with a Single Strand, a Double-Strand and a Triple Strand Pearl Necklace remaining. The Single and Double-Strand Necklaces feature exquisitely matched natural white pearls with a gorgeous warm Creamy-Rose Overtone. The Double-Strand Dodge Necklace measures 4.35-10.35mm with 76 pearls on the inner strand, and 86 pearls on the larger outer strand. The Single Strand Dodge Necklace features 62 pearls measuring 0.05-4.20mm. Both necklaces are finished with stunning diamond clasps, decorated with cushion-cut, square-cut and old mine-cut diamonds mounted in platinum.

The Exotic Beauty of Black Pearls


Our direct-to-consumer business model means the same quality as the big luxury brands, but a fraction of the cost. 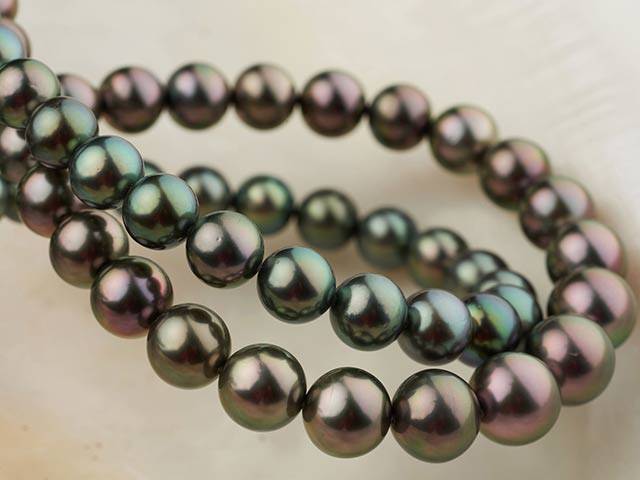 This gleaming and silvery-white to creamy-colored natural pearl Double Strand Pearl Necklace is a jaw-dropper, and shines with an iridescent pink to green Orient. The 120 natural pearls graduate from 6.5-12.25mm and are round in shape, with a gorgeous luster and shine. To learn more about how much pearls are worth, and how they’re evaluated visit our Pearl Education section.
The Double Strand Natural Pearl Necklace is finished with a custom-designed 3.00cttw diamond clasp, created and signed by Cartier.

This stunning pearl necklace has an illustrious and tragic history. Initially owned by Marie Antoinette, the doomed French Queen who was beheaded during the French Revolution. It is unknown how the necklace escaped France after her death but it remains that the pearl necklace was not “officially” owned again as part of a collection until it was gifted to socialist Barbara Hutton in 1933. The necklace was a gift from her father, heir to the Woolworth Department Store fortunes in the United States. Hutton was known for her beauty and wild spending habits – while she was incredibly rich in her youth, she ultimately died bankrupt after 7 marriages.

The Hutton/Antoinette Pearl Necklace features 44 exceptionally beautiful round pearls, measuring 8.7-16.33mm which is finished with a large and stunning turquoise and diamond clasp. When last brought to auction at Christie’s in 1999, the necklace fetched a record buying price of $1.47 Million. While the record has since been broken by other natural pearl necklaces of storied provenance, at the time the Hutton/Antoinette Pearl Necklace was the most expensive pearl necklace in the world.

The Perfect Strand of Pearls

The perfect strand of pearls... Is it possible?


Perfectly round, beautifully matched, with a mirror like luster – Japanese Akoya pearls can’t be matched for quality and high-end appeal. This is the classic pearl necklace.